As a lay person primitive in my understanding of technology I recently began creating a series of ‘Industrial Totems’ paying ambivalent homage to what I consider to be, ‘Life Within the Machine.’

In each, I have juxtaposed and arranged in grids, rows, and columns basic triangles, circles, squares and rectangles to mimic mechanical elements in an effort to imply order and specific functionality while ultimately providing none.

Signpost is the third in my totem series but while the first two were the result of adding components to a central vertical element, Signpost is primarily defined by the subtraction of form. Rather than rely on faceted topography to capture light and shadow, Signpost’s identity is achieved by allowing light to merely pass through, that is, until we reach the top where the system’s restraint gives way to a flurry of indecipherable cantilevered arrow activity.

While the planar surfaces of Signpost are intentionally understated and reminiscent of - perhaps - digital circuitry, it was important to me that ‘the signs’ at the top provide little in the way of discipline or direction.

As a statement about technology one might interpret this piece as being along the lines of, ’So here we are having arrived at this great technological moment, now what? Isn't it supposed to tell us what to do next?’

But at a personal level, the contrast between the tightly defined column and absurd arrow configuration is also symbolic of transitional moments in my own life when, after expending much energy creating a highly detailed and complex rationale my decision has ultimately come down to…….the toss of a coin. 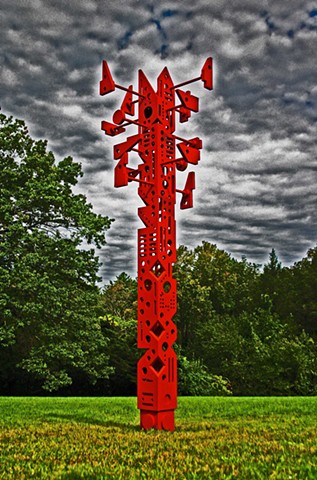